The Commissioner of Police, Delta State Command, Ari Muhammed Ali,  has reinstated his commitment and that of the Command in ensuring that Delta State is crime free, as arrest one suspected kidnappers and two suspected internet fraudsters.

Ari also noted that a crime free Delta State could be achieved when members of the public partner with the Polic, just as he appreciated the collaborative efforts of sister agencies as they have been of immense support to the Command as the Police cannot do it alone.

According to a statement signed by DSP. Bright Edafe, Police Public Relations Officer (PPRO), Delta State Command, Asaba, the arrested suspected kidnapper, Osagie Felix ‘m’ age 36yrs of H & H Ologbo in Edo State, has confessed to being a member of the kidnapping syndicate that recently kidnapped a Benin based Pastor

The statement  reads, “On 10/01/022 at about 1030hrs, the DPO Oghara Division CSP Jimoh Hassan received an information from the DPO new Etete Division in Benin City, that on 9/1/2022, a Pastor was kidnapped  along with his Lexus 330 SUV with Reg no KWL 510 BH  black in colour and that after a painstaking technical intelligence led investigation, it revealed that the vehicle was parked  along Ibori Road in Oghara.” 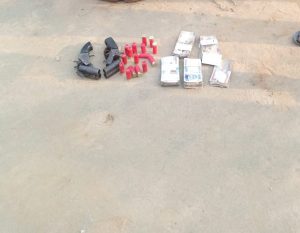 “The DPO Oghara Division detailed and led operatives to the area where the said vehicle was sighted. Upon sighting the Vehicle, the Operatives laid ambush and waited for the suspects to show up. Three men later appeared to pick the vehicle and the Operatives rounded them up,  but two of the suspects escaped while one of them named Osagie Felix ‘m’ age 36yrs of H & H Ologbo in Edo State  was arrested.”

“Upon interrogation, suspect confessed to being a member of the kidnapping syndicate that kidnapped the Benin based Pastor. He  led the Operatives  to freedom view hotel in Oghareki where they were hibernating. Upon arrival at the hotel, the owner of the hotel aided the escape of the other two suspects and ran away.”

“The suspect Osagie Felix led operatives to  his room in the Hotel and upon search,  one cut to size double barrel pistol, six live cartridges and the sum of four hundred and ten thousand naira (#410,000)  which was part of the Five hundred thousand naira (#500,000) ransom were recovered. Suspect also led the operatives to  another room where another double barrel pistol, ten live cartridges and a laptop were also recovered. The Victim’s vehicle was also recovered  to the station. Serious manhunt for the fleeing suspects is ongoing.” 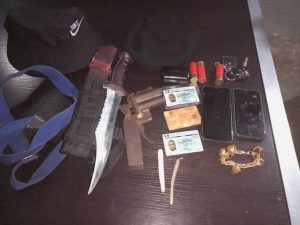 Meanwhile, the Delta State Police also on January 8, 2022, arrested two suspected Internet fraudsters in the capital city of Asaba with a cut to size pistol and other items.

“After a painstaking search was conducted on the suspects and the vehicle, one locally made double barrel pistol, three live cartridges, one jack knife, two wraps of substances suspected to be  Indian hemp, one Samsung Galaxy, one Iphone, two black berets, a driver’s license, one GT bank ATM card, one hand chain and five finger rings were recovered.”

The release added that investigation later revealed that the suspects are into internet fraud and one of the  Suspects  Daniel Anikpe admitted that he got the gun about eight months ago from his friend named Tata (surname unknown) who is currently in Ogwashi-uku prison for an offence of armed robbery.

It added that the admitted that he bought the gun at a cost  of twenty-five thousand naira(#25,000), as he also confessed that in the course of his Cyber crime activities, issues bordering on sharing formula usually emanates with his partners in crime, hence he bought the gun to exert revenge on whoever tries to swindle him of his ill gotten money.

The Commissioner of Police Delta  State Command while commending the gallant officers also applauded the collaborative efforts of the DPO new Etete Division in Edo State and the DPO Oghara Division as it was their working synergy that led the arrest of the suspect.