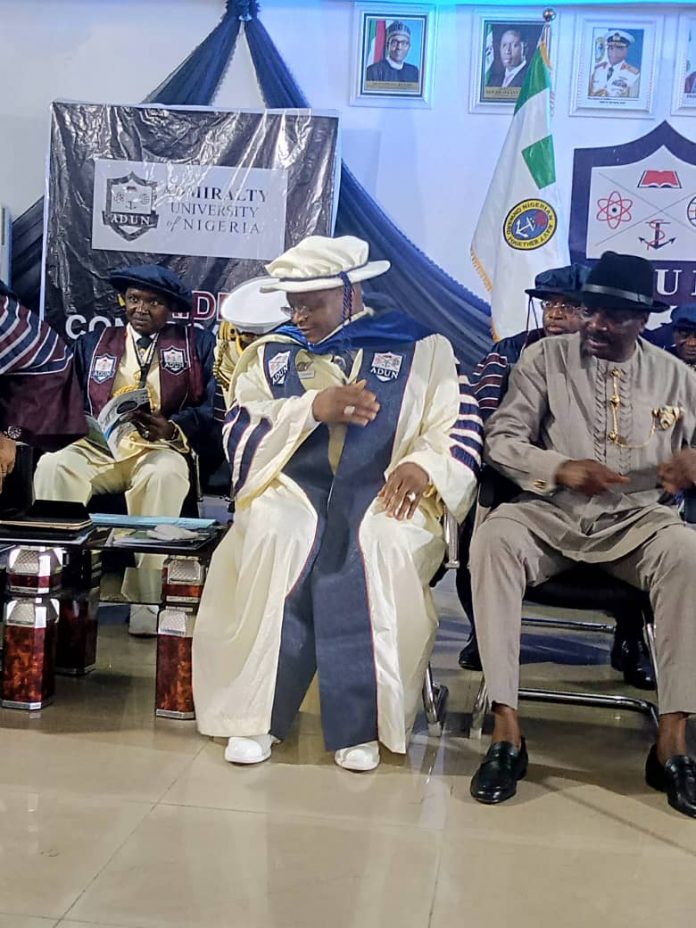 The Vice Chancellor, Prof. Paul Omojo Omaji made the disclosure at the maiden convocation ceremony held at the five years old University, assuring that the standard envisaged by the founding fathers would be jealously pursued.

Prof. Omaji explained that “amongst the graduands, 24 graduated with First class, 76 made Second Class (Upper Division), 52 had Lower Division of Second Class, while only one left with a Third Class”.

He said Mr. Ape Terhemba Moses of Cyber Security Department, who scooped 5 prize awards, was the best graduating student for the 2021/2022 Academic Session.

The guest lecturers, Mr. Tony Elumelu who spoke on leadership, maintained that passion and hard-work were keys to success in businesses.

In his speech for the recognition of his contributions towards the establishment of the University, Rear Admiral C. O. Ezeoba (Rtd), a former Chief of Naval Staff, said words were not enough to express his appreciation for the help and roles played by the Senator representing Delta North Senatorial District, Senator Peter Nwaoboshi.

Ezeoba while receiving his recognition award from ADUN said “apart from his contributions towards the actualization of establishment of the Admiralty University of Nigeria in Ibusa, Senator Peter Nwaoboshi also donated his personal lands on pro-bono that is now part of the land the University is occupying today.

The Ogbuzo of Ibusa, HRM, Luke Nwaoboshi and Chief Okocha were also recognized by the University for their roles.

Other highlights of the event were projects commissioning, tree planting, recognition of those that contributed to the reality and successes of the School so far and awards of honorary Degrees on some notable Nigerians.

Also in attendance were the Pro Chancellor Prof. Salihu Mustafa, Service Chiefs and representatives of the Nigeria Military, retired military personnel including Rear Admiral C. O. Ekeoba (Rtd), HRM Prof Luke Nwoboshi, The Ogbuzo of Ibusa, the monarch of the host community among other top dignitaries that graced the occasion.