The Chief of the Naval Staff (CNS), Vice Admiral Awwal Zubairu Gambo, has commended the Executive Governor of Delta State, Senator Ifeanyi Okowa, for the donation of 120-room accommodation facility at Sapele for Admiralty University of Nigeria (ADUN) students commencing academic session in the faculties of Engineering a d Technology and Maritime Studies.

Vice Admiral Gambo gave the commendation in an address he presented as the Guest of Honour on the occasion of the 4th Matriculation Ceremony of Admiralty University of Nigeria (ADUN), Ibusa, Delta State, held at the weekend.

Represented by Real Admiral SS Lassa, GMD/CEO Nigerian Navy Holdings, Vice Admiral Gambo, said that the matriculation ceremony was special because it was coming in an academic session when the University will be graduating her first graduands into the workforce of Nigeria in particular and the world at large.

“The Nigerian Navy is thus happy to be associated with recent developments in the affairs of the University. Firstly, is continuous facility, faculty and subsequent academic expansion.”

“It would like to use this opportunity to thank His Excellency the Executive Governor of Delta State, Senator Dr. Ifeanyi Arthur Okowa for the donation of 120-room accommodation facility at Sapele for Admiralty University of Nigeria (ADUN) students commencing academic session in the faculties of Engineering a d Technology and Maritime Studies this summer.” 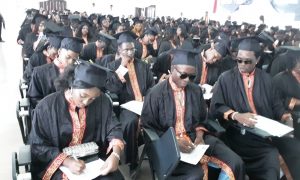 The Vice-Chancellor, Professor Paul Omojo Omaji who declared the ceremony open, revealed that ADUN was destined for greatness, saying that the objective of the University was to expand frontiers of knowledge in various unique specialization so as to use university education as a tool towards development and enhancement of human wellbeing.

The Vice-Chancellor who disclosed that ADUN matriculated 156 students, said the school has over 500 students and over 200 staff as at today with immense passion for excellence in education by distinguishing itself from the conventional university through its uniqueness in what she offers. 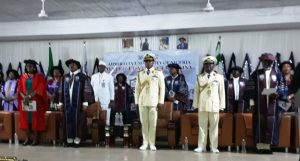 Among other achievements mentioned by Prof. Omaji was the grating of full operational license with 12 unique programs approved for them University.

In her matriculation lecture delivered, Prof. Oyedunni Arulogun of the University of Ibadan, titled, “The invading Force of Science and Technology and the Complementary Role of Entrepreneurial Education in the new world, encouraged stakeholders of the university to work together to instill the culture of excellence in science and technology using entrepreneurial education as the springboard.

Prof. Arulogun emphasised that technology is an innovation that have significantly alters the way consumers, industries and businesses operates saying the mainstream market initially fears to adopt it.

However, she revealed the numbers of benefit to include lower prices, improved quality and increased healthy competition by making products and services better, faster and affordable.

Prof. Arologun said she want to see a campus where entrepreneurship education was built into every aspect of life, noting that there was need for curriculum review for the present students need to be helped to develop the 21st century skills of critical thinking, collaboration, communication and creative skills.