ACOMIN, a non governmental organisation (NGO), has advocated all inclusive approaches towards the elimination of the malaria scourge in Nigeria.

The NGO through its State Programme Officer, Sir Austin Uwede, stated this while briefing the press at the temporary press centre of the Nigeria Union of Journalists (NUJ) in Asaba, the Delta State capital.

He said that Malaria ” is a public health challenge in Nigeria,” adding that more than half the population of the world ” are at the risk of the preventable disease caused by the female anopheles mosquitoes. ”

Sir Uwede stated that ACOMIN had been engaged by the Catholic Relief Services (CRS) under an ongoing Global Fund Malaria Grant to continue the implementation of the civil society component after successfully done that from 2019 to 2020.

He said that the programme was being implemented in 13 supported states in the country, including Kaduna, Kano, Katsina, Ogun, Osun, Delta and others, adding that the project “covers 8 Local Government areas (LGAs) of each of the states, just as he disclosed that in Delta State Isoko North, Ughelli North and South, Sapele, Patani, Ndokwa West, Aniocha South and Oshimili South LGAs have been earmarked for coverage in the project. 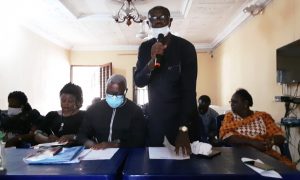 Uwede said that several efforts, including provision of free insecticide treated nets, deployment of volunteers to sensitise the grassroots populace, provision of free malaria test kits and medicines at some health centres and monitoring to ensure to ensure accountability in malaria intervention at the community level.

He stated that the scourge of malaria had continued unabated owing to some challenges, including difficulty in accessing some communities and drug resistance by the malaria parasite.

Uwede pointed out that to fully combat malaria, there was the need for all ministries and agencies to scale up community-centred initiatives in their programmes, adding that donors should increase their support in that regard, while the mass media should assist in the dissemination of relevant information to the public, just as he stressed that youth bodies in the communities should be sensitised as veritable tools in the cleaning up of the environment to forestall the breeding of mosquitoes.

A representative of one of Society for Family Health (SFH), Mrs. Mercy Momoh, explaining some points, emphasised that malaria remains one of the highest killer of human in the world , particularly in the African continent.

Mrs. Momoh thereby, call for concerted efforts by all facets of the society towards curbing the menace passed by malaria, adding the death toll as a result of the problem would be reduced to the barest minimum if everyone takes it seriously