The cleric made the assertion in a chat with Our Correspondent during the second graduation ceremony of the institution held recently, noting that the government needs to improve in all areas. 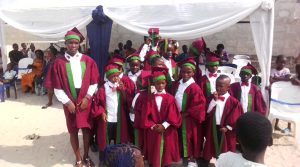 Pastor Idjedena also said budgetary allocations should be made and delivered to the relevant security agencies to enable them fight insecurity in the Country to a standstill.

According to him,”They need to empower the security agencies with sophisticated arms and ammunition so that whenever they go out for operation, they will be successful. ”

He said a total of eighteen(18) pupils graduated from the school today.

Pastor Idjedena explained that the eighteen pupils include those who graduated from KG 1 to Primary 1 and from Primary 6 to secondary School.

He thereby, advised the graduands to improve on their academic by engaging in continouse studies, as well as be rmain focused in the pursuit of the career choices.

He encouraged them not to forget the morals imparted on them by the school, adding that with the rising disregard for sound moral values it was imperative that they engage in activities that would bring g about respect to them, their families and society at large.