Ikeogwu gave this commendation at the inauguration of the well furnished journalists’ house on Friday, October 28, 2022 by Governor Okowa.

The highly elated NUJ Chairman noted thay “this day will forever remain indelible in the minds of practicing journalists here in Delta State and beyond.”

“Let me first appreciate God Almighty, the maker of heaven and earth for making this day a reality after 31 years of creation of Delta State.

“That this is happening in our time, means so much to us as a union and to me as an individual, it gives me immense joy that this magnificent edifice is being commissioned under my watch as the Council Chairman.

“Your Excellency, you may not know exactly what you have done for media practitioners in Delta State. For your information, this singular act of putting a roof over our heads and taking us out of the street to become landlords, has etched your name on the sand of times. 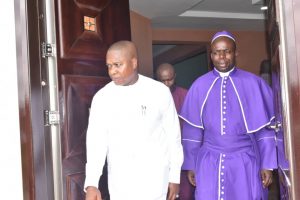 “You have given us a name and identity, you have taken us out of Egypt to our promised land. You have put unquenchable smile on the faces of members and defeated the imagination of naysayers praying that we continue to wonder about as normads.

“Your Excellency, that you completed the building project would have given us enough reason to celebrate, but going ahead to tastefully furnish the centre is another monumental achievement that must be counted for your administration.

“I hereby on behalf of the members of our great union express our profound appreciation to you and the government of Delta State for this gift of a press centre. We also commend you for your infrastructural development and other dividends of democracy that you have delivered across the state and urge you not to relent even as you pursue your ambition as the Vice Presidential candidate of the Peoples’ Democratic Party (PDP) in the 2023 general elections.” He stated. 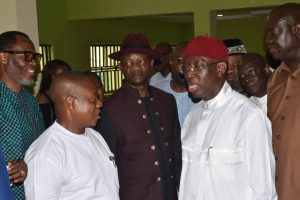 Comrade Ikeogwu appreciated the efforts of the State Commissioner for Information, Mr. Charles Aniagwu who he said committed alot in seeing that the project became a reality.

He equally commended the individual and collective efforts of the immediate past Governor, Dr. Emmanuel Eweta Uduaghan, the secretary to State Government, Chief Patrick Ukah, pioneer chairman of state NUJ, Comrade Ovuozorie Macaulay and his predecessor, Comrade Norbert Chiazor in the actualization of the Press Centre.

Ikeogwu further noted the effort of the Press Secretary to the Governor, Mr. Olise Ifeajika in ensuring the welfare of journalists in the state.

He appealed to Governor Okowa to consider the provision of operational vehicles for the Union and linking the edifice “to the Independent Power Plant that is serving the State Secretariat for constant power supply. This will enable practitioners who are on duty 24 hours of the day, discharge their duties without hindrance”.

While assuring the governor who is also the vice presidential candidate of the PDP for 2023 general elections of proper media reportage of his administration’s successes to Deltans and Nigerians, Comrade Ikeogwu commended journalists in the state for remaining committed to the discharge of their constitutional responsibilities as watchdogs and thanked them for their continued support to his administration. He promised to continually seek opportunities to upscale their welfare. 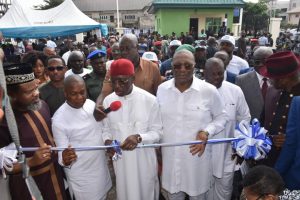 In his address, NUJ National President, Comrade Chris Isiguzo, lauded Governor Okowa for encouraging Press Freedom by improving the working condition of journalists in the state.

He said that a free press, independent, vibrant, objective and nationalistic was critical pre-condition for good governance in a democracy.

“In most countries of Africa, especially in Nigeria, in the past years, the greatest advertisement for the democratic dispensation is the free climate of dialogue and debate (free expression) that has been initiated and sustained by the media.

“The existence of an unfettered and independent press is necessary for democracy to flourish. The right to freedom of expression, thought and association will strengthen and encourage accountability of governments to all citizens,”
Isiguzo said.

He said government officials were expected to be honest, responsible, transparent, accountable and efficient in administration and service delivery.

“Where any of these is lacking or is deliberately subverted, it is the responsibility of the media to raise alarm,” Isiguzo stated.