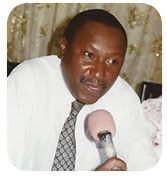 Renowned legal practitioner, Mr. Oghenejabor Ikimi Esq today said the people of Nigeria needs a National Conference of all ethnic nationalities with a view to draft and give themselves a “people oriented constitution that’s acceptable.”

Mr. Ikimi made the assertion in a telephone chat with Our Correspondent in Warri noting that the existing constitution is a product of “Decree 34” and was not the people’s constitution.

“Not this National Assembly or senate we have. These people, they’re not after the interests of the Nation. You can imagine, they want to create more States when we are thinking of merging States together. They’re thinking of creating more States.”

According to Ikimi, “The people too are very hungry. They don’t know what they want. So, when they dangle a few naira in the face of these hungry constituents, the people are confused.”

“So, what we really need is a kind of National Conference irrespective of the Senate or our representative is for us to have a conference of all ethinc nationalities and within a six months, let’s draft an acceptable constitution. A brand new constitution for the country. If not, left for the Senate and the house of representatives, they will not do it because they’re pursuing their own personal interests above national interests.

“If somebody says we should create more States. They’re talking about 50 states. How can they sustain 50 States when some of the existing States do not have money to pay their workers? When some of the States do not have money left to carryout development projects? They don’t have it and you are creating more States. I don’t think there is sense in that. It’s just the same old constitution that’s handed over to us vide the Decree”

Mr. Ikimi also noted that in the new constitution, the people must look at how they will be structured, stressing that Nigeria is structured to fail and nothing good can come out of it whether through alteration of the existing constitution because of the way it is currently structured.

He said whether the constitution is altered 100% nothing will come out of it because a few people sat down and drafted the constitution and not the people of Nigeria in a national conference.

While noting that Nigeria cannot develope,Mr. Ikimi said, Ikimi said that something has to be done so that we can give ourselves a befitting constitution for the country to move forward.
#.