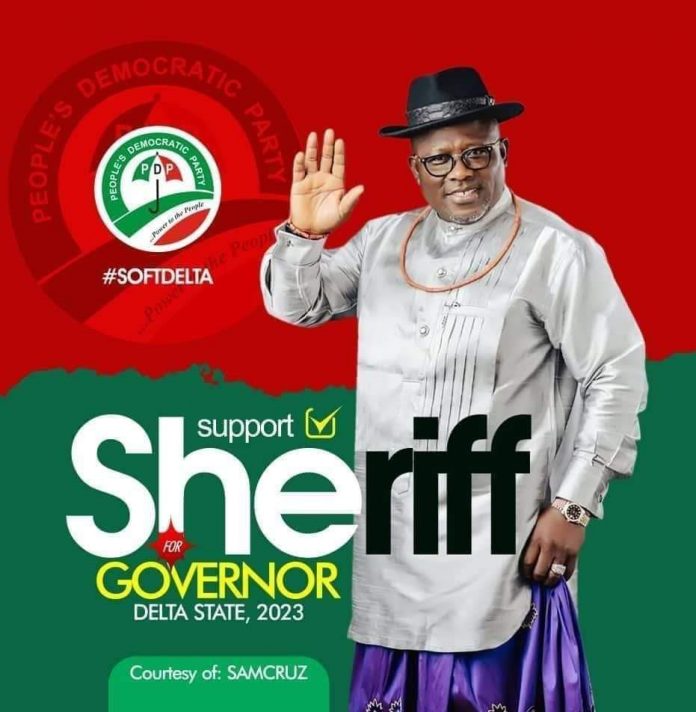 …Wailing And Gnashing Of Teeth In Edevbie’s Campaign Organisation.

It is now crystal clear that Olorogun David Edevbie is gasping for political oxygen as his governorship ambition continues to suffer multifaceted resistance, rejections and setbacks as a result of his epileptic human relations and odious past in public service.

The latest bombshell that has blown away Edevbie’s political roof came from the Forum of Former Delta PDP Chairmen, an assemblage of political strategists and statutory delegates of the Peoples Democratic Party, PDP.

The group on Monday 2nd May 2022, unanimously adopted the street credibility impresario and Pan Delta Governorship Aspirant under the Peoples Democratic Party, PDP, Rt Hon Elder Sheriff Francis Oborevwori as the forum’s sole governorship candidate in the forthcoming PDP primaries and gubernatorial election in the state.

Members of the forum is estimated to be over 120 statutory delegates comprising of PDP former Chairmen from 1998 to 2015. Their electoral value in terms of delegates votes is substantial and will to a large extent determine the winner among aspirants on 23rd May.

Councillors across the three senatorial districts are also statutory delegates, as well as all past executive members of the party in the state. They have all pitched their political tents with the unifier, Rt Hon Sheriff Oborevwori, and will be casting their precious votes for SHERIFF at the party primaries on May 23, 2022, and at the Gubernatorial election in 2023.

The political reality from the above scenario is that Olorogun David Edevbie has been left alone to lick his wounds. There is wailing and gnashing of the teeth in Edevbie’s campaign organisation as you read this piece.

It is very serious and a reliable source close to Edevbie said, “Our Principal has informed some of us his close associates and media team to get ready for the inevitable alignment with the Sheriffied political family.

“It is obvious that Sheriff Oborevwori is the choice of Deltans. We gave up hope, the very moment we saw the calibre of PDP leaders and personalities in Oborevwori’s consultation team. Yeah, it was glaring he is the anointed one for PDP Guber ticket,” the source said.

It is the rule that once a party gubernatorial candidate emerges, all aspirants of PDP are to collapse their political structures into the party’s state campaign committee to win election.

Fillers from Edevbie’s camp is to the effect that the campaign organisation will comply after the primaries on 23rd May, by joining the ongoing Sheriffication of Delta State, for a landslide victory at the polls in 2023.