What seems to be cold war between the office of the Delta State Commissioner for information with members of the Nigeria Union of Journalists (NUJ), Delta State council appears to have been put to rest following the Commissioner’s visit to the council temporary secretariat where he reiterated robust partnership with the union towards the actualisation of the stronger Delta vision of the state government.

Our correspondent reports that early this year, the union at the end of its congress issued a communique which government officials in the state perceived to be anti-governmet, and since then, the union relationship with the government got soured.

Members of the union in her November monthly congress, were happy when the State Commissioner for Information, Mr. Charles Aniagwu attended the meeting. 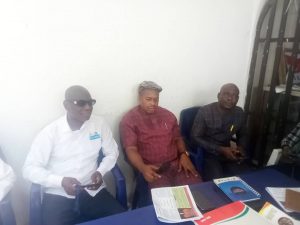 Speaking, Mr. Aniagwu who identified journalists as critical stakeholders in the actualisation of Governor Okowa’s finishing stronger come 2023 than his beginning in 2015, explained that no detractors of the state government could take advantage of any crack in the relationship to peddle rumours and fake news to the detriment of the state.

He said that the Okowa led administration had done much in the positive transformation of the state, adding that the monumental strides of the administration were verifiable and urged journalists to showcase such to the public in unbiased reportages.

The commissioner promised to ensure early completion of the union press centre in Asaba early next year, saying that paucity of funds had stalled its completion this year, just as he expressed joy that the unnecessary crack between the state government and the union had been amicably cemented.

He said that the leadership of the union appreciated the kind gesture of the state government to complete the press centre of the union in the state, adding that efforts should be geared towards its completion to enable the council take ownership and serve the members better.

Comrade Ikeogwu appreciated Governor Okowa’s unprecedented monumental development of the state, saying that there was the need to beam brighter light on such uplifting of humanity through robust reportages by journalists in the state and beyond to encourage him to finish stronger than he started in the state.

Journalists who were in attendance at the congress commended Mr. Aniagwu for identifying with the union in the state.