Comrade Ikeogwu made the call while speaking with newsmen at the reception ground of the Celebration of the passage of Late Chief Artur Okowa held at Federal Road Safety Corps Training Centre at Owa-Alero, Ika North-East Local Government Area of Delta State

Ikeogwu said that Pa Okowa, aside being the biological father of the number one citizen of Delte State, Governor Ifeanyi Okowa, he was an educationist who left his footprints on the sands of time, as everyone who passed through his tutelage, has one good thing or the other to say about him.

He said Pa. Okowa led a fulfilled life of impeccable character which will continue to reviberate in the minds of those who really appreciate the core value of producing great sons and daughters who have made enduring marks in the fields of endeavours.

“As you can see, nothing can best describe a man who led a fulfilled life. Delta State has been agog with visitors from all over the world to grace this unique celebration of life. The who is who in Nigeria are here and I must say they are here because he imparted positively not only to his children but to all those who came in contact with him. ”

“One thing many do not know is that he was also very active in his community. God kept him to become the eldest in his community and that is to pass on to the younger generation the virtues that God endowed him. We have come to join his immediate family, children, the people of Owa Kingdom, Ika people and Deltans in general to celebrate a rare leader,” Ikeogwu stated.

He enjoined Nigerians to always remember that each and everyone of must have at the back of their minds that one day we will all depart from this sinful world, adding that the legacies we leave behind will speak for us either negatively or positive. 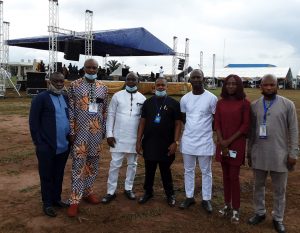