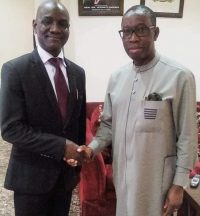 Oghenesivbe in swift reaction to the State Executive Council approval on Thursday 19th May, for the immediate construction of Okpe and Agbonmiyerin Streets, described the projects as his 60th birthday gift from governor Okowa and the state government, adding that Okpe street has been long abandoned by successive governments.

He posited that governor Okowa has broken the jinx by approving the construction of the two roads which shall be commissioned before his handover date on May 29, 2023.

“I feel like breakdancing because the two road projects just approved by Exco has been abandoned by previous administrations in the state.

“I cried to Gov Okowa to do something, and as a promise keeper the roads will now be constructed. This is remarkable, our amiable governor has again kept yet another promise. Thank you Sir.

“By this singular act, Gov Okowa has given me a voice in my community to shine and to mobilize heavily for our great party, the Peoples Democratic Party, PDP. I am indeed very grateful.

“Those who said that Okowa does not have Latimore’s time, those who lied that Okowa hates Latimore, will have to walk back their lies and misconception, and join me to thank my good boss, the road master, Gov Okowa, for his visionary leadership, and for honouring me and Kokori community in this dispensation.

“My elders and youth in Okpe and Agboniyerin streets, as well as the good people of Kokori community in Agbon Kingdom, conveys their profound gratitude and appreciation to His Excellency, the Governor of Delta State, Senator Dr Ifeanyi Arthur Okowa.

“It is becoming glaring by every passing day that Ethiope East PDP shall win elections in 2023, because of the unprecedented socioeconomic and infrastructure development in the LGA by Okowa administration,” Oghenesivbe assured.