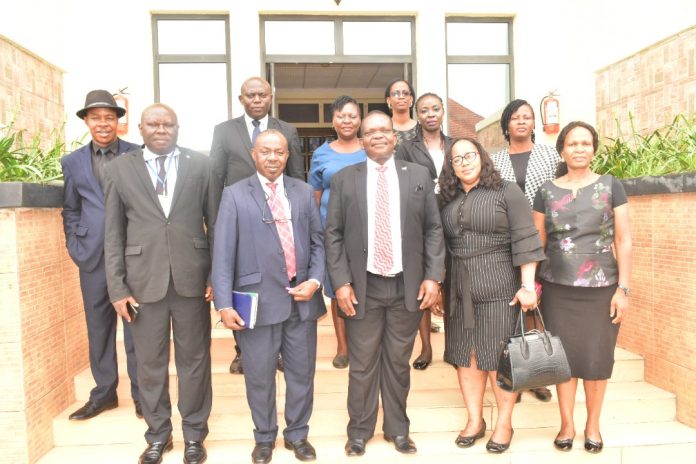 Members of the Law officers Association Of Nigeria,(LOANS) Delta State Chapter, have condoled with the family of the Permanent Secretary, Office of the Secretary to Delta State Government (SSG) , Comr. Samuel Dietake of Ethiope Local Government Area of Delta State over the death of their mother, Mrs. Janet Avwovwekpada Dietake.

The Chairman of the Law Officers Association Of Nigeria, Delta State chapter, Barrister Thomas Anigara who led his members to the home of Comr. Dietake , described their late mother as a role model who had impacted much on the lives of others.

Mr. Thomas Anigara , Esq who spoke on behalf of his members said, ” We members of the law officers
Association Of Nigeria are here to say sorry over the death of your mother. You should take heart. What happened has happened. God allows it hence it happened this way. Be consoled with the fact that Mama is already in heaven with God ”

He added, ” Death is inevitable. Like the biblical saying, when God says, it is your turn, no one can stop it. It remains your turn. Everyone of us must die one day. We are only praying that we should not die young but to live longer on earth before it comes.”

Mr Anigara said , if it was cash, the late Mrs. Diateke would not have died, because her children has the capacity to take her to the best hospital for a proper medication.

He further described the Dietake’s family as very great people because of the stuff they were made of as people who have impacted positively on the lives of others making himself as an example of the beneficiary of their benevolence.

He assured the family that they will be fully involved in every aspect of the burial ceremony since the family are members of LOANS by association.

Earlier, the permanent Secretary, Office of the Secretary to the State Government , Comr. Samuel Dietake appreciated members of LOANS for their good gestures in commiserating with them in their moment of bereavement .

He added that since the demise of their mum, this is the group that has demonstrated much love and concern for his family, stressing that he , as the pioneer Chairman of the Senior Civil servants Association of Nigeria, Delta State Chapter had not seen such kind people.

He added” members of LOANS had shown great respect for him for paying a solidarity visit. ” I want to assure you that we are doing everything we can to give my mother a befitting burial ceremony and your presence will be greatly appreciated” ,he said.