This was contained in the 9th National Assembly Mid-Term Assessment Report conducted by Order Paper Nigeria in collaboration with Nigeria Union of Journalists (NUJ), dotCivics and Coalition of Nigeria Compatriots (CNC) and made available to newsmen in Delta State. 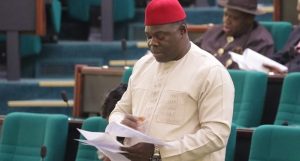 The mid-term report indicated that Senator Omo-Agege of APC, sponsored the highest number of bills of 20, amounting to 83.33 % of all the bills sponsored by the three senators from the state.

The report added that 16 of the bills were sponsored in the first legislative year of the 9th Assembly, prominent among which was the passed Sexual Harassment Bill.

The report aggregated the score cards of the three senators to represent 3.2% of the total 747 bills sponsored at the Senate in two years.

It stated that out of the 92 bills sponsored by the 10 representatives from the state, the member representing the Ndokwa/Ukwuani Federal Constituency, Honourable Ossai Nicholas Ossai, had 44 to his credit, representing 83%, adding that 30 of his bills were sponsored in the first legislative year.

The duo of Honourable Thomas Ereyitomi and Honourable Victor Nwaokolo were reported to have sponsored three bills each, leaving Honourable Nicholas Mutu and Honourable Leo Ogor with no bills sponsored in the mid-term report, adding that it would be recalled that Honourable Mutu had been in the House since 1999 and was the Majority Leader in the 7th Assembly of the House.