The Nigeria Union of Journalists (NUJ), Delta State Council has inaugurated a 17-man committee to midwife a media award to deserving illustrious Deltans to commemorate the 30th anniversary of the state.

The committee would at the same time, initiate ideas towards raising an endowment fund of #500 million for the establishment of NUJ Estate and other business concerns to create a sustainable means of revenue to the union.

The committee was inaugurated today, 4th June, 2021, at the NUJ Temporary Press Centre in Asaba, by the Chairman, Comrade Michael Ikeogwu.

Ikeogwu charged members of the committee to show unflinching commitment and dedication to the course by seeing the project as their own in the interest of changing the narratives for the union in the state.

His words, “We have stayed in the trenches for too long. This is the time to make things happen for our great Union by making the desired progress that will launch us into limelight.”

“The NUJ Delta 2021 Media Award provide us the opportunity to honour credible individuals from our state who have made far-reaching accomplishments in their chosen careers.” 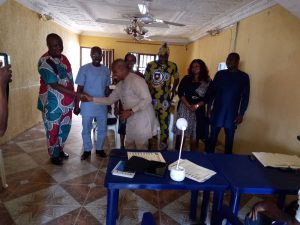 “Also note that we have always desired that we own our own NUJ Village just like in other state councils. For this reason, we are instituting an Endowment Fund of #500 million to kick-start the establishment of NUJ Estate in Delta.

“Thanks for accepting to serve our great Union at this critical moment in our history. God bless and strengthen your energy to work for the success of this project”, Ikeogwu stated.

The General Manager, Mega FM Warri, Lady E. Ejiro Umukoro who spoke on behalf of members of the Committee, expressed gratitude to the NUJ Delta State Council Executive for finding them worthy to function in the Committee.

She noted that there has been a burning desire in her for the Journalism profession to be independent, adding that an independent media practice would engender a verile society where both government and the govern will contribute their quota.

She acknowledged the fact that their appointment into the committee was a call to duty, adding that all things being equal, the programme would help to strengthen the relevance and credibility of the union.

Umukoro further urged members to come on board by bringing on their ingenuity for a collective professional course, maintaining that this is the time to use the project to raise the bar for our great union. 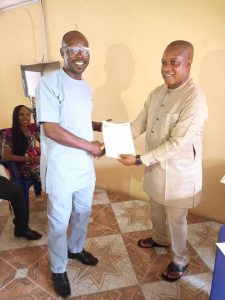