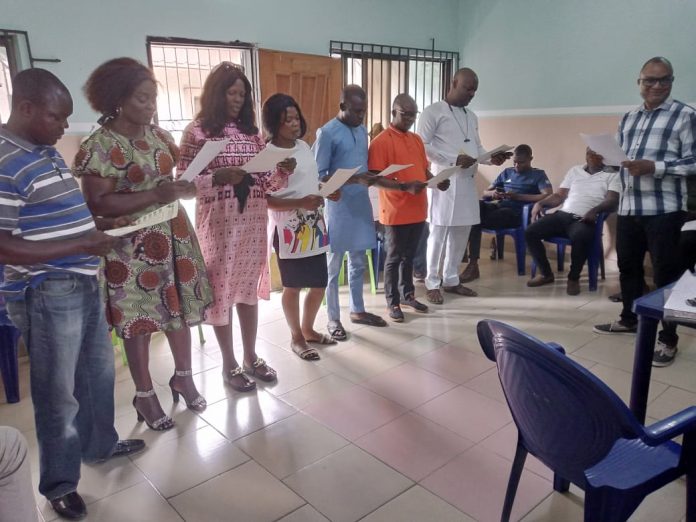 The Nigeria Union of Journalists,  Ughelli Correspondent Chapel, on Friday 19th August 2022, inaugurated new executives that will pilot the affairs of the Chapel for the next 3years.

The Chairman of the Credentials Committee of the chapel, Comrade Moses Omovevah, stated, among other things, that all the inaugurated executive members of the chapel were returned unopposed.

In his acceptance speech, the  newly inaugurated Chairman, Comrade Apah, on behalf of others, thanked members for their support.

He promised to operate an open door system of administration where every member would be carried along.

Comrade Apah solicited for the continued support of members to enable his committee take the chapel to greater heights.

High points of the event were the formal dissolution of the immediate past Comrade Sunday Apah led executive committee and inuaguration of the new committee by the Assistant Secretary of the Nigerian Union of Journalists ( NUJ ), Delta State Council,  Comrade Felix Ekwu.

In his keynote address, Comrade Ogono, Vice Chairman of the Council, who led the Delta State NUJ Council delegates to the event, congratulated the inaugurated executives of the chapel and urged

He urged them to carry every member along, just as he enjoined members to support the new executive committee of the chapel.