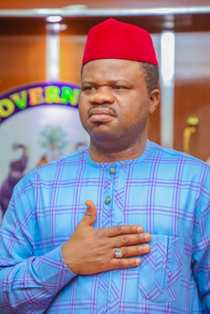 Governor Ifeanyi Okowa of Delta has congratulated Comrade Chris Isiguzo on his re-election as President of Nigeria Union of Journalists (NUJ).

In a statement by his Chief Press Secretary, Mr Olisa Ifeajika, in Asaba, Okowa lauded the union’s delegates for re-electing Isiguzo for a second term.

He expressed optimism that Isiguzo would perform better in his second term given what he brought to bear on the union’s leadership in his first term.

He remarked that Isiguzo, first elected President of the union in 2018 at Abeokuta, had not only stabilised the NUJ, but had also brought a lot of candour and panache to NUJ leadership.

Okowa said, “I have never doubted your ability to effectively lead the union to enviable heights you have taken it to, and i must thank your colleagues for rewarding your excellent performance in the last three years by unanimously returning you and some of your executive members unopposed.

“As we approach the 2023 general elections, the role of the media in ensuring that Nigerians get free, fair and credible polls cannot be overemphasised.

“I, therefore, charge you and your colleagues to provide balanced reportage as you shape opinions and set agenda ahead of the polls.

“The media as Fourth Estate of the Realm must, at this critical time in our country, prominently play its fundamental watchdog role, holding leaders accountable to the people.

“The media should lead in directing governance on the right path, including the rule of law, and ensure that all tenets of democracy are upheld in the country.”

“On behalf of the government and people of Delta, I congratulate you, Comrade Chris Isiguzo, on your well-deserved re-election as president of Nigeria Union of Journalists,” he added and assured him and the union of his support at all times.

The governor congratulated members of the union for a successful conference.