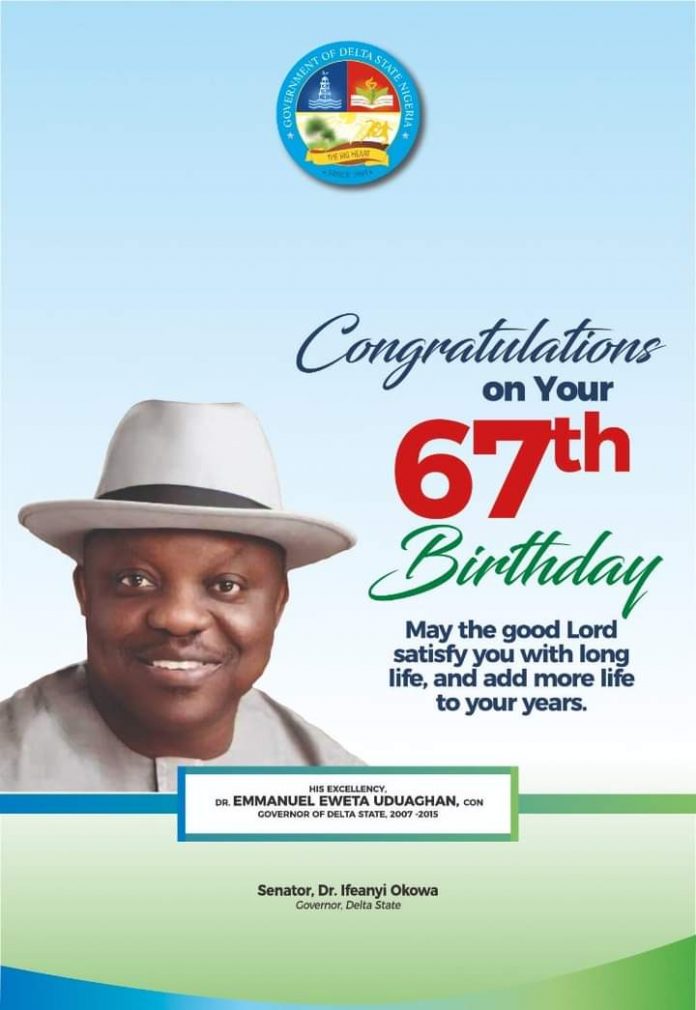 In a statement by his Chief Press Secretary, Mr Olisa Ifeajika, on Friday in Asaba, Okowa commended the former governor for his amazing contributions to the growth and development of Delta.

He described Uduaghan as “as a quintessential leader” whose contributions to the evolution of the state would remain indelible.

He urged him to continue to avail the government and people of the state of his selfless service and advice, and prayed that God Almighty would continue to bless him with good health and long life.

According to Okowa, Dr Uduaghan demonstrated immense courage and determination in protecting lives and property of Deltans amid communal crises in parts of the state when he held sway as Governor of the state.

He particularly lauded the former governor for some landmark projects to his credit, saying that the infrastructure would remain sterling signposts of his stewardship in the state.

The governor also remarked that Uduaghan’s legacies formed part of the foundation that his administration had continued to build on since 2015 when it birthed.

“Your Excellency, your selfless and impressive performance as Governor of Delta has already distinguished you as an elder  statesman and people-oriented leader.

“Since leaving office in 2015, you have remained a great figure and an inspirational leader in our state and country,” he said.

“On behalf of my family, the government and people of Delta, I congratulate our dear leader and former Governor, outstanding statesman and an astute politician, Dr Emmanuel Eweta Uduaghan, on his 67th birth anniversary.

“On this auspicious occasion in your life, I join your family, friends and well-wishers to thank Almighty God for His continued love and goodness to you,” Okowa added.