Members of the People’s Democratic Party (PDP) in Ughelli North LocalGovernmentArea of DeltaState, have paid a condolence visit to the family of late Gen. Dominic Oneya on his demise.

Sitted to welcome the PDP family were the immediate family members and a solid representation of Agbarho community and politicuans.

Speaking at the occasion, the Chairman of the PDP in Ughelli North, Chief Lawrence Agbatutu, extolled the enviable qualities of Late Gen Oneya, saying that his demise was a painful to them.

He noted that the General led a good life which has manifested in the quality of children he bred and the teeming followership of the PDP family who admired him so much. 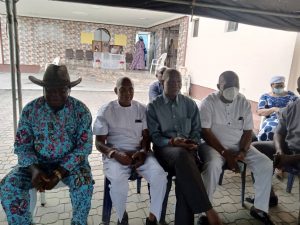 Responding on behalf of the Oneya family, Mr Anthony Oneya, thanked the visitors noting that the burial plans have reached advanced stage.

He stated that, “The best respect that should be given to my late Dad is to keep his legacy sailing in terms of loyalty to the Party and having a good sense of objective foresight in leadership”.

The Leadership of the PDP then signed the Condolence register