Parasitology and Public Health Society of Nigeria (PPSN), yesterday, raised concern over the increasing Tropical Parasitic Diseases and the heavy burden it had placed on the region over the years, but with”no Political Will by African leaders to nip the crippling and killing parasites in the bud”.

Vice-Chancellor, Delta State University, DELSU, Abraka, Prof. Andy Egwunyenga, raised the concern in a keynote address at the 46th Annual conference, holding in Delta State Abraka, Ethiope East council of Delta State, lamenting that the consequences of parasitic infections are very devastating in terms of human sickness and deaths, as well as agriculture and animal grazing, and so, governments must rise up to the challenge. 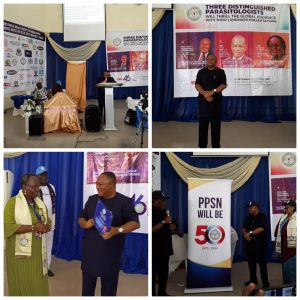 According to Egwunyenga, who delivered the keynote address with the theme of the 46th annual conference, “POLITICAL WILL TOWARDS DISEASE CONTROL-THE AFRICAN EXPERIENCE”, stressed that tropical parasites shorten lives, reduce the ability to work or attend school and impose a lifelong burden on Africa’s potential for development.

The Professor of parasitology and public health consultant who brazenly bemoaned the burden of the tropical diseases in Africa though with far fewer resources, stated that diseases cause mass poverty, high fertility rate, slow economic growth, deforestation, rapid urbanization and increased migration, wars and natural disasters across the African continent.

These, according to him, were contributing to increased transmission and distribution of diseases, hence there must be urgent needs in building the political will for effective disease control, to bridging the gap in health financing, priority setting and on how best to improve prevention, monitoring and control of diseases rather than relying more on foreign aid such as World Bank which, only this year, allocated $100 million to help enhance and support African countries in preparing for, detecting, and responding to disease outbreaks and public emergencies.

He said diseases cost the African Region $2.4 trillion a year and nearly 639 million years of healthy life were lost in 2015 while In sub-Saharan Africa, an epidemiological transition in the last 20 years has seen the rise of non-communicable disease as the leading cause of death in many countries.

“The health challenge has been well recognised by African governments resulting in the Abuja Declaration in 2001 and other follow-ups but responses have been mixed with most countries unable to meet the funding target of 15 percent, including Nigeria, with average budget of about 4.7 percent since the past 20 years while the highest is Swaziland with 17 percent, he regretted.

He revealed that Extreme poverty continues to drive increased burden of disease in Africa because of 736 million people who lived on less than $1.90 a day, more than 413 million of them were from sub-Saharan Africa; adding: “Africa share of global health expenditure is less than 1 percent leaving more than half of its population without access to essential health services”.

He expressed worry that deaths from non-communicable diseases,
NCDS, are likely to increase by 17 percent globally over the next 10 years, and African Region will experience a whopping 27 percent increase, which is twenty-eight million additional deaths from conditions such as cardiovascular diseases, cancers, diabetes and chronic respiratory diseases (Naik and Kaneda, saying they are projected to exceed the combined deaths due to communicable, maternal, perinatal and nutrition-related diseases.

Prof. Egwunyenga, however, regretted that Nigeria government, compared to other African countries, has failed woefully, in ensuring that 15 percent of its annual budgetary allocation goes towards health, after all.

The parasitologist hinted that political will to sustainably fund health and disease control was weak, noting with emphasis that Politics and Health Financing in Nigeria
Commitment to adequately fund health and disease control programmes in Nigeria is hampered by the inability of government and politicians, particularly the National Assembly to set the right priorities.

“Aside from other unstated allowances, Nigerian Federal Lawmakers in 2020 allocated to themselves, a total of N268 billion and N463.76 billion to Health. An analysis of the budget shows that more than half of all Nigeria planned to spend on health in 2020 (N463.7 billion) went to the National Assembly. This meant that for every N2 spent on Nigerian’s health care, N1 went to the National Assembly. In pitiably same year Nigeria spent N500 billion on medical tourisms”, he revealed.

In his address, Prof. Sammy O Sam-Wobo, President, Parasitology and Public Health Society of Nigeria (PPSN), said it was worthy to note that they were in a near-constant state of improvement and regeneration of existing policies and scientific procedures, and PPSN has the gift of remaining contemporary to her members and their aspirations, as well as the society at large, in advancing the culture of scientific progression to measure up with global curve of rapid scientific novelties in research, prevention and control of parasitic diseases.

He said this year’s conference theme “Political Will Towards Disease Control – The African Experience”, was well chosen considering the present realities in most African countries where parasitic diseases especially Neglected Tropical Diseases (NTDs) still hold sway and the Government going nothing to salvage the situation.

While summarizing key achievements of PPSN to include building the capacity and development of a critical mass of doctoral level scholarships for the continent, practical engagement in intellectual discourse, knowledge production, policy definition and intervention against diseases and their agents, Prof. Sam-Wobo thanked members of PPSN Council, BoT, College of Fellows, Zonal and Chapter coordinators, all members of PPSN and Local Organizing Committee for their enthusiastic commitment to ensure the success of the outstanding conference.

A special logo, designed by a member as the official logo for PPSN@50, was unveiled which kick-started awareness activities towards celebrating the Society in 2023.