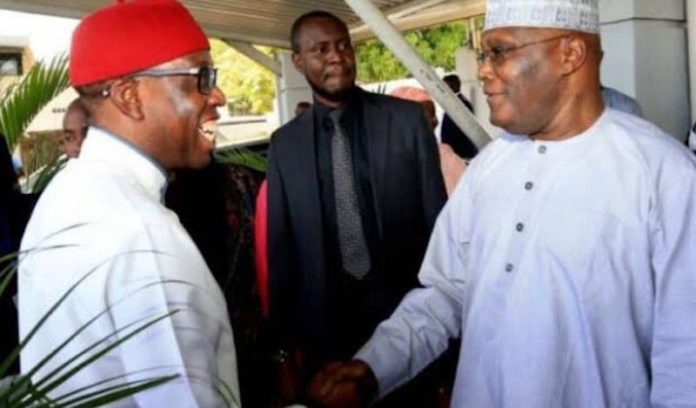 There is no gainsaying the fact that the Presidential Candidate of the Peoples Democratic Party, PDP, Alhaji Atiku Abubakar, desires a trustworthy, incorruptible, competent, wise, good listener, problem solver, intelligent and experienced politician to be by his side as Vice President, to solve the multifaceted socioeconomic problems and infrastructure deficit flowing from the abysmal performance of President Mohammadu Buhari’s administration in the past seven years and still counting.

This is fundamental and in considering his running mate, Alhaji Abubakar, must of a necessity permanently look at the direction of the platinum governor of Delta State, Senator Dr Ifeanyi Arthur Okowa, for so many reasons.The above qualities are inherent in Okowa, a seasoned technocratic, competent administrator and detribalised Democrat.

Okowa is a prudent manager of scarce resources, a focused and pragmatic leader, a founding member of PDP, never left the party under any circumstances, and has the capacity and ability to deal with complex issues of party politics, electioneering and governance.

His track records in Delta State is worthy of emulation by the incoming Unifier Governor, Rt Hon Sheriff Francis Oborevwori. Okowa was nicknamed “The Roadmaster” by Vice President Yemi Osinbajo, because of his monumental achievements in road infrastructure; constructed and rehabilitated over 3,000 kilometres of roads and 2,600 kilometre of bridges across Delta State within seven years and still counting.

Delta State health policy under governor Okowa is about the best in Nigeria, the state was the first implement the health insurance policy under the Delta State Contributory Health Scheme, renovated and equipped all state hospitals complemented by the establishment of Sickle Cell Centres in the three senatorial districts by 05 Initiative, a pet project of Her Excellency, the Wife of Governor Okowa, Dame Edith Okowa.

Governor Okowa’s ingenuity and visionary leadership created wealth and jobs for over 10,000 youth through the Yagep, Step, Rysa and Project Gest human capacity development and skills acquisition programmes. His model has been applauded by the World Bank, Central Bank of Nigeria, Federal Government of Nigeria,Tony Elumelu Foundation and special agencies of the United Nations.

Okowa as Vice President to Atiku Abubakar shall be of great benefit for PDP national government because he will replicate these laudable programmes subject to Mr President’s approval, for the benefit of millions of unemployed Nigerian youth, skilled and unskilled, occasioned by the poor management of the nation’s resources by APC national government in the past seven years and still counting.

The Atiku/Okowa synergy will facilitate the growth of the nation’s economy, repayment of the huge debts incurred by Buhari administration, create job and wealth for Nigerians, solve the acute problems of disunity, insecurity, religious and ethnic conflicts, bring about an era of prosperity and economic boom, as well as speedy and sustained growth of our great party, PDP.

The combined capacities of President Atiku and Vice President Okowa, shall facilitate peace and conflicts resolutions, sustain peace building, efficient management of the nation’s resources for sustainable economic growth and prosperity for Nigeria and Nigerians.

Okowa has been tested and trusted as far as internal party politics is concerned. His integrity, ability to get things done without blemish, speed of work, organisational sagacity and inestimable intellectual acumen had in the past two decades helped to sustain unity and progress within the party at state and national levels, and also helped to deepened the nation’s democracy.

The governor of Delta State, Okowa, excelled in all PDP national and regional assignments including the 2019 presidential primary in Port Harcourt, largely acknowledged as the best well organised party presidential primary in the history of internal party politics in Nigeria. Governor Okowa’s skills are multidimensional, superlative and result oriented.

Governor Okowa’s vast knowledge of state and national politics as well as deep understanding of economic issues and how to turn around failures into huge success within a reasonable time singled him out as the best running mate for our amiable presidential candidate, Alhaji Atiku Abubakar, Turaki Adamawa.

It is therefore safe to assert that Atiku administration, PDP and the country stand to gain substantially if governor Okowa, who is also the incumbent Chairman of South-South Governors Forum, is picked by our great party as the running mate for PDP Presidential candidate in this electioneering dispensation in the political and leadership history of Nigeria.

Okowa carries unspeakable amazing grace of God. This uncommon divine spiritual aura will bring about luck and landslide victory in 2023. His positive aura and super charisma blends with the personality and aristocratic dignity of Alhaji Atiku in this milestone journey.

The Atiku/Okowa ticket is a perfect deal, it will bring luck and prosperity to Nigeria.

Finally, it is fair to also state that Okowa is reliable, dependable, patriotic, physically fit and in excellent health condition to work long hours needed to reposition Nigeria, and return the country to her original status of a prosperous nation, the giant of Africa.

Look no further, Atiku/Okowa ticket is the real deal.
***
The Writer; Olorogun Dr Fred Latimore Oghenesivbe, is the Executive Assistant to Delta State Governor on Communications, a Lawyer and Chairman, Coalition for Media Politics and Governance, CMPG.