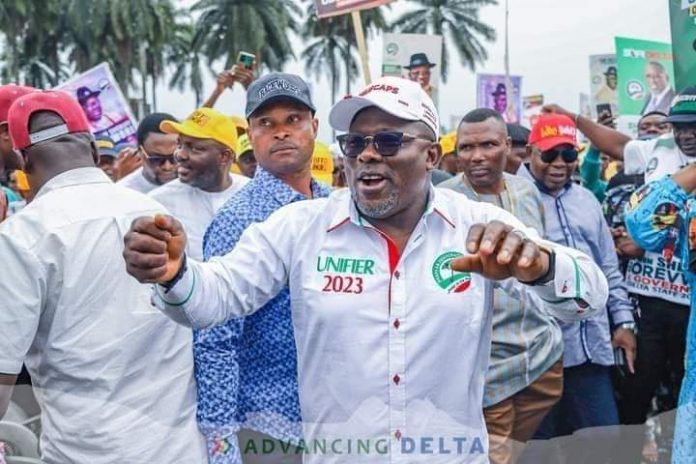 …Says No Vacancy For Coup Financiers And Mace Runners In Government House.

A chieftain of the Peoples Democratic Party, PDP, Olorogun Dr Fred Latimore Oghenesivbe has said that the governorship candidate of PDP in the State, Rt Hon Sheriff Francis Oborevwori, will effortlessly defeat candidates of All Progressives Grand Alliance, APGA, and All Progressives Congress, APC, Chief Great Ogboru and Senator Ovie Omo-Agege in the 2023 gubernatorial election.

He gave the assurance while speaking to newsmen during the 7th anniversary of Okowa administration Praise and Worship Thanksgiving Service, held on Monday 30th May at the Event Centre, Asaba, saying that the total collapse of Ogboru/Agege political alliance was for the good of the state.

Oghenesivbe who is also the Leader of Sheriffied Delta Media Group and Executive Assistant to Gov Okowa on Communications, further asserted that the enviable achievements of his boss, Senator Dr Ifeanyi Arthur Okowa, in the past seven years and still counting, shall be the winning card for PDP in 2023, coupled with the political popularity, solid Street Credibility, competence, humility, visionary leadership and integrity of PDP governorship candidate, Rt Hon Oborevwori.

The PDP chieftain and communication impresario, disclosed that the duo of Ogboru and Agege went their separate ways because of uncontrollable greed, acute desperation and strong desire to take control of Delta State Treasury, so as to achieve their separate life time ambition of becoming multi billionaires overnight through manipulation of public funds.

He recalled how Chief Great Ogboru sponsored the Gideon Okah coup just to become a billionaire through the back door, since he could not achieve his objective in the private sector as a fish seller, while Senator Ovie Omo-Agege did the unspeakable at the national assembly by allegedly masterminding the unlawful snatching of Mace during Senate plenary, all in a bid to become relevance politically.

“PDP Delta and our candidate, Rt Hon Sheriff Francis Oborevwori, won’t lose an ounce of sleep over Chief Great Ogboru and DSP Ovie Omo-Agege in the forthcoming gubernatorial election in the state, come 2023.

“Governor Okowa’s superb achievements shall speak for our party, PDP, and for our governorship candidate in 2023. It’s truism that Okowa is the best governor since the creation of Delta State. This fact is not in dispute across the state.

“The 7th Thanksgiving Service of this administration is the last for him as governor because his tenure shall terminate on May 28, 2023.

“Okowa is our hero for life. He is the best thing that happened to Delta and Deltans in this political and leadership dispensation. But Oborevwori will listen more and do M.O.R.E for Delta and Deltans. The state will keep making substantial progress by the grace of God.

“APC and APGA are both forbidden fruits in Delta State. Delta is PDP and PDP is Delta State, they are conjoined twins, inseparable spiritually and physically. The connectivity is deep rooted and divine to a reasonable extent.

“The duo of Agege and Ogboru combined is less than 10kg in political electioneering weight, as far as 2023 governorship election contest is concerned. The other 90kg is Rt Hon Sheriff Francis Oborevwori.

“Agege and Ogboru parties; APC and APGA, are both strangers to Deltans, they shall suffer humiliation and rejection at the polls in 2023. Their try your luck game shall exceed 2023 and beyond 2031.

“Agege and Ogboru are known to be political prostitutes, always jumping from one party to another, all in a shameful bid to take control of Delta treasury.

“Agege and Ogboru have no agenda, no manifestos and no clear cut reasons why they want to govern the state. As far as they are concerned, the state treasury is a life time ambition that must be achieved through any means possible. Too bad.

“Oborevwori is a divine project, a Pan Delta incoming governor who will build on the solid socioeconomic remodelling strides and overall development of the state, triggered by governor Okowa and his deputy, Deacon Barr Kingsley Otuaro.

“There is no vacancy for Military Coup financiers and mace runners in Government House, Asaba, come 2023,” Oghenesivbe said.