The member representing the people of Warri South Constituency II in the Delta State House of Assembly, Hon. Matthew Poko Opuoru has declared his intentions to re-contest in the 2023 election.

The lawmaker made this known when he paid a consultation visit to the National leader of Urhobos in Warri South, Chief Israel Abido a.k.a, Shallom at his Ekpan residence in Uvwie Local Government Area. On Monday March 4.2022.

Hon. Opuoru said, “I am here to declare my intentions. I am contesting.” 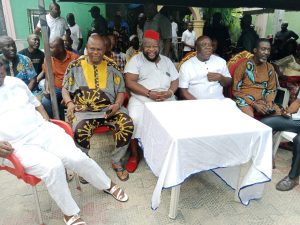 Hon. Opuoru who is seeking for a second term in office also sought the support of the Agbarha-Warri leader in his political ambition.

He thanked Chief Abido for his humility, straightforwardness and his integrity, saying that he stood by him during the last elections.

Hon. Opuoru who gave his stewardship in the past three years in the Delta State House of Assembly, promised to complete the projects at Merogun, Dore-Numa, Ogedegbe and Agbassa primary schools under Warri South Constituency II by July this year amongst others.

In his response,Chief Israel Abido, a leader of Agbarha-Warri Kingdom told the lawmaker that he is heading towards his second term.

According to him, “You’re heading towards your second term. We are going to stand behind you and for you. So far so good, I have not got any alternative to you. You’re the one and only I know.”

While noting that God gave the people of Warri South Constituency II Opuoru, Chief Abido said the people of Agbarha-Warri must pray for him to succeed and not die.

In a voice vote Chief Israel Abido conducted, the people of Agbarha-Warri Kingdom unanimously agreed to vote for Hon. Matthew Poko Opuoru for a second term in Office.