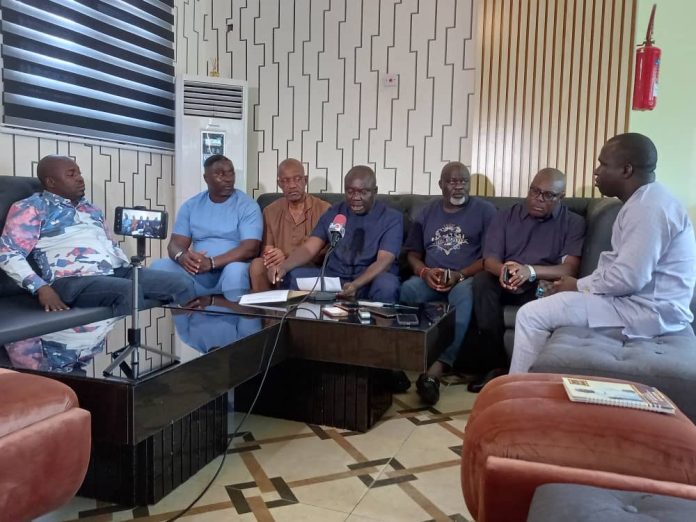 Following Urhobo Progress Union (UPU), publication on mainstream and social media titled, “Our Stand; Our Choice”, the Association of local Government of Nigeria (ALGON) Delta Central Chapter, has passionately appealed to the leadership of Urhobo Progress Union (UPU) not to delve into politics, noting that, the primary duty of the apex body of the Urhobo ethnic nationality is to promote the culture and tradition of the Urhobo people hence it will be proper to strictly adhere to vision and mission of the founding fathers.

The Press Release read in parts: “Our attention has been drawn to an advertorial published by the Urhobo Progress Union, UPU on page 9 of the Sunday 17th edition of the Vanguard Newspaper titled, “Our Stand; Our Choice”.

“It is clear from the advertorial which is also being circulated in the mainstream and social media that the current leadership of the UPU is being misguided.

“Our reaction therefore is to guide and passionately appeal to the the UPU leadership, whose primary duty is to promote the culture and tradition of the Urhobo people and to strictly adhere to vision and mission the founding fathers.

“Without priding ourselves, Local Government Council Chairmen who are the key political stakeholders, especially at the grassroots, which is the basic foundation of any political endeavour were not consulted or carried along.

“If we as Local Government Council Chairmen were carried along in this decision, we would have offered our candid advice and perhaps avert this adoption one aspirant among other qualified sons of Urhobo nation.”

They further stated that; “We have been following the political development in Delta State from 1999 till date, and in the build up to the forthcoming 2023 general election with keen interest.

“We are not happy with the decision of the Urhobo Progress Union, UPU the apex socio-cultural body of Urhobo people to adopt any aspirant as the preferred candidate of the Urhobo ethnic nationality whereas we have other Urhobo sons also contesting the gubernatorial election in Delta State.

“Wisdom would have thought us from history that the UPU coming out to adopt one aspirant as its candidate against others have never ended well and therefore should be discouraged in its entirety.

“The founding fathers of the UPU did not form the Union as a Political Party, or as an extension of a Political Party nor a political pressure group, therefore is an abnormal for the body to come to the political field or gallery to poke nose let alone adopting an aspirant.

“We however advise that the role of the UPU as a socio-cultural group should be to make deliberate effort to unite its political class.

“We therefore strongly advise the UPU leadership to backtrack and rescind its decision in the interest of unity and love in Urhobo in particular and Delta as a whole.”