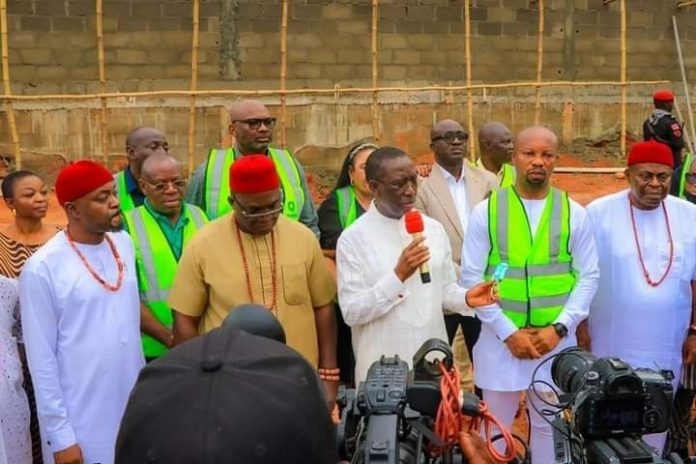 Governor Ifeanyi Okowa of Delta on Thursday, said the Agro-Industrial Park being executed by his administration at Aboh-Ogwashi, Aniocha South Local Government Area, would be ready for inauguration in November, 2022.

Speaking with journalists shortly after inspecting ongoing works at the park, the governor, who said that the contracting firm had assured on the completion of the project, explained that the project was necessary to enhance development of the state’s agro potential.

He said that basic infrastructure were being put in place at the park to meet completion target, and lauded the host community for support and cooperation for the project “which holds a lot for mutual benefits for the community and investors”.

“Let me appreciate the level of cooperation we have had with the Ogwashi-Uku community because they gave us over 180 hectares of land for the Agro-Industrial Park.

“We thought the park was necessary because of the need to help develop our agricultural potential in this state and the Park is actually meant for agro-processing and we are using rice mill as the nucleus of the industrial production coming up in this place.

“But many other agro-industry processing facilities and industries are supposed to come in here and you can see that there are already mapped out commercial plots ready for allocation for companies that want to come in.

“The basic infrastructure at the centre is already being put in place not just for the rice mills; you have service quarters, warehouses and many other things that are going to come in, including the source of power.

“The most important thing about this park is the river which means that we are able to provide irrigation services all year round from that river.

“I have drawn their attention on the need to start the road development in the park because of the rainy season that is about to set in because that’s the only set back they are likely going to have.

“The contractor has promised to deliver the project towards the end of November which means if they start the road project now, they will still have time during the break in August and in the later part of October to finish with the road project,” Okowa said.

He pointed out that establishing rice factory in the park would help to encourage out-growers across the state to help feed the rice mill and engender direct positive impact on Deltans.

“The process of encouraging out-growers and giving them rice seedlings that are very high-yielding and with agricultural extension support services that will be provided to our people, will be definitely impact directly on the families that will be engaged in the rice farming.

“This will help to create jobs and multiply the family income of the communities around Ogwashi-Uku and even across the entire state.

“We are also expecting that many other agro-processing companies will come in place and that will begin to stir up developments in other areas beyond rice.

“The park is a community of its own where you have various agro-processing industries co-sharing common facilities for agro-indstrialisation in the state,” he stated.

On the Kwale Industrial Park, the governor said that it had suffered delay because of COVID-19 but expressed optimism on making it a free trade zone.

He said that the state government was working with the Federal Ministry of Trade and Investment to designate the park as an Export Processing Zone.

“The Kwale Industrial Park is supposed to be a gas-based park and we had a lot of setback because of COVID-19.

“For two years we have not been able to progress because not many investors are ready at the moment to come invest as a result of the COVID-19 pandemic.

“We travelled to China and we had firm commitments concerning gas based industries but unfortunately, they were not in the mood to move our because as soon as we came back within two months the COVID-19 set in and till today they haven’t visited.

“We are also working with Minster of Trade and Investment with the Export Processing Zone to see how we can turn that whole area into a free trade zone.

“We are working on that at the moment and we are setting the ground work for the next administration to take off fully.

“We are doing the initial fencing and there is a lot of work ongoing and recently one of the companies in Delta have spoken to us to move to that area and we are working on giving them 20 hectares of land.

“Once we are able to attract one major company to that place it will stir up more companies to come,” he said.

While saying that the project would revolutionise the agro-potential of the state economy, they charged the contracting firm to redouble efforts with a view to delivering the project on time in line with contractual agreement.

The governor was conducted round the various departments of the Park by the Chairman of the Implementation Committee, Professor Eric Eboh, and Project Consultant, Mr Kester Ifeadi.