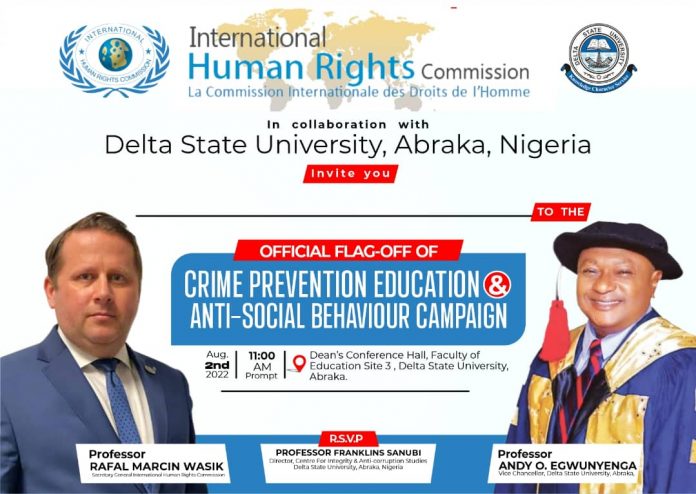 The Special Monitoring Mission of the International Human Rights Commission (SMM IHRC) in the Niger Delta Region Nigeria has affirmed a partnership agreement with the Delta State University (DELSU) Abraka, to embark on a campaign aimed at reducing crime and other social vices within the university community.

The IHRC Editor-in-Chief for African Countries and Regional Coordinator Niger Delta, Ambassador Fidelis Onakpoma, in a statement made available to newsmen, saying that the Implementation of the first phase of the Project tagged “Crime Prevention Education and Anti-social Behavior Campaign,” was an advocacy and sensitization project designed for tertiary institutions in Nigeria, particularly in the Niger Delta Region. 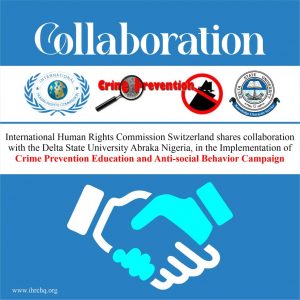 Ambassador Onakpoma, said the Delta State University Abraka under the amiable leadership of Prof. Andy Ogochukwu Egwunyenga, has officially conveyed his approval of the implementation of the project in the Institution, adding that the project is a planned effort that seeks to reduce the risk of crimes occurrence and their potentially harmful effects on individuals and society; providing guidelines for crime prevention and anti-social behaviors by creating distinct campaigns that educate young people and instill moral values.

He noted that prevention is the first imperative of justice, adding, “Crime prevention comprises strategies and measures that seek to reduce the risk of crimes occurrence, and their potentially harmful effects on individuals and society, including fear of crime, by intervening to influence their multiple causes. There is clear evidence that well-planned crime prevention strategies not only prevent crime and victimization but also promote community safety and contribute to the sustainable development of countries.”

“Effective, responsible crime prevention enhances the quality of life of all citizens. It has long-term benefits in terms of reducing the costs associated with the formal criminal justice system, as well as other social costs that result from crime”

He further highlighted the following objectives of the project to include, “Developing and resourcing national/state plans and policies to address factors that promote criminal activities and proffering a lasting remedy. Break the culture of silence and increase the level of collective participation in curtailing crimes and conflict resolutions. Increase awareness of these issues with the use of the observatory platform.”

Others are, “Facilitate and support opportunities for crime prevention and other associated vices commonly found among young people. To abolish the several dangerous assumptions about the role, position, and contribution of youths seen as potentially dangerous ‘subjects’ and policy approaches often regarding them as ‘a problem. To develop and build collaboration among stakeholders to ensure the culture of peace and lawfulness is possibly attained without restrictions.”

He stated that the Campaign is connected to the Sustainable Development Goals, specifically SDG target 4.7, which calls for the member States to engage in education on the promotion of a culture of peace and non-violence, stressing that teaching and research on issues related to the United Nations Office On Drugs and Crimes (UNODC)-mandated areas will be facilitated and promoted.

While thanking the school authority for embracing the partnership with International Human Rights Commission, Ambassador Fidelis emphasized that the IHRC Secretary-General Prof. h.c. Rafal Marcin Wasik has already established that through our partnerships, we will join hands in carrying out sensitization and capacity-building programs that educate our youths on resolving disputes, deter crimes of all kinds, such as trafficking, drug abuse, cultism, illegal migration, and equip them with moral knowledge for social change and most importantly educating them about the United Nations Universal Declaration of Human Rights.