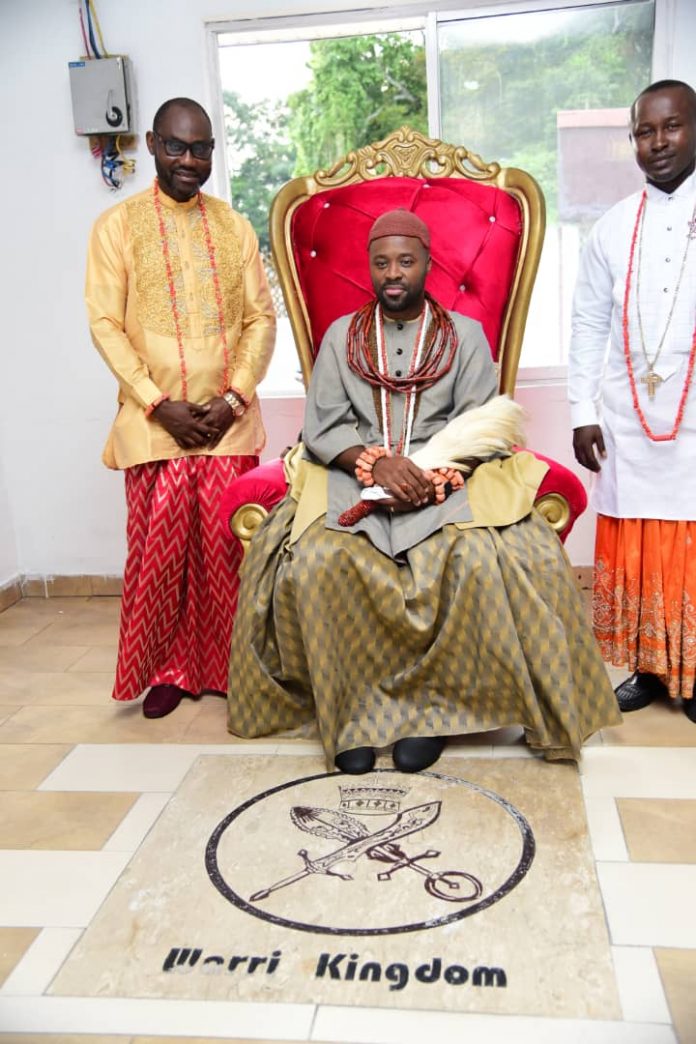 The Olu of Warri Kingdom, HRM. Ogiame Atuwatse III, recently received and prayed for the Candidate of the Delta South Senatorial District under the New Nigerian People’s Party (NNPP), Commodore Omatseye Nesiama and two others ahead of the 2023 forthcoming general elections in the Country.

Ogiame prayed for Commodore Nesiama, Comrade Hossana Jalogho Williams and Engr. Tsola Olueh when they paid him homage at his palace in Ode-Itsekiri, at Ode-Itsekiri, the ancestral home of the Itsekiri people also known as “Big Warri”.

He said he received many politicians at his palace in Warri but does not know why the Commodore was received at the Ode-Itsekiri palace.

HRM. Ogiame Atuwatse III said there could be something significant in the precedence not duly followed in receiving and attending to Commodore Nesiama and the others in Warri.

“We did not even follow precedence set here in attending to you. You’re the first politician to be attended to at Ode-Itsekiri, the ancestral home of the Itsekiri. We received other candidates in Warri. There’s something here but whatever good there’s, may it get to you.”

The King prayed that the people of Delta South Senatorial District should receive the message of hope which the former Deputy Director, Naval Intelligence is preaching to change the narratives.

Earlier, Commodore Nesiama expressed delight being received at the palace in Ode-Itsekiri.

“I am also delighted to have been received in the palace, the ancestral home of our people. I count it a great privilege. Very lucky also. I stand to be corrected being the very first candidate of a political party to be received in this palace.

“It’s not by accident but by divine arrangements and I pray that my mission here will be fruitful like my party symbol indicates. My party’s symbol is a basket of fruit and foodstuffs in the Nigeria map reason that we should know that Nigerians should be able to have food to eat.

Commodore Nesiama said that he was not at the palace to malign his opponents or anybody because he based his consultations on issues by preaching his message of hope and possibility to change the narratives.

He said he had gotten great measures of endorsements during his consultations amongst the ljaws, the lsokos, the Itsekiris, the Urhobos, the other settlers in this our constituencies.

“According to Shakespeare particularly Brutus in the play Julius Caesar he said and I quote. “There is a tide in the affairs of men which when taken at the floor leads to fortune. The tides is flooding now. The Itsekiri people are at the arm. They have the advantage for them now. We must take advantage of this flood time. If we miss the tide and going too slow in the air, it will be very challenging and providence will not forgive us.”

Commodore Nesiama said there will be no forgiveness if the people elect persons who are not qualified and capable of speaking and without integrity and pedigree as their representatives.

He said people will not respect them if such representative cannot make its points correctly even when things are written to him to present.

“And if we get it wrong there is no forgiveness at the national level we will pay dearly for it for the next four and a half years probably beyond. So, I am here to respectfully request to our people to give good concentration to whoever is going to represent us at the national level national assembly, and at the state house of assembly. And there is no sentiment here. Because whatever thing we do wrong whatever feet we take wrong will affect us for a very long time.

“Today we have a King Ogiame Atuwatse lll, who himself has brought quality to royalty . We deserve to have quality also brought into legislative. If we have an all complementive legislative representative, the work done by our father I pray it doesn’t go to nothing. I need to be complimented with an equally good representative at the state houses of representative and the national assembly.